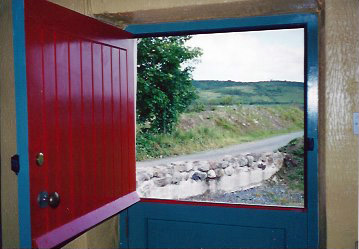 View from A Rented Cottage in County Clare, photograph by Wesley Moore III

Although I’m certain I have a drop or two of Irish blood, I’m not of the Catholic immigrant variety with distant cousins in Kerry or Donegal. Nevertheless, ever since I saw at the age of seven Darby O’Gill and the Little People, I have loved that “little green place” and its soulful inhabitants, its poetry, music, fairies and leprechauns, its abundance of foxgloves, and those mountains in the distance so vaporous it looks as if you could puncture them with your forefinger.

And, oh my god, that rainbow I encountered in 1978 outside of Limerick! 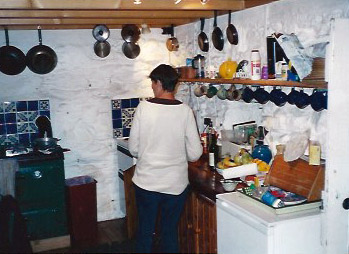 Ireland was the first place I went abroad at twenty-five, and I have been twice again since. In the previous century, Judy, our boys, and I rented cottages, burned peat, shopped at the butchers, drank and listened to music in the pubs, climbed Ben Bulben’s back, and crawled our way up Croagh Patrick. 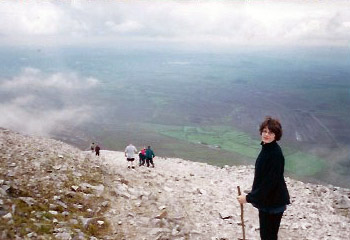 We got to know our neighbors, so hospitable. Here below are the boys helping John Joe O’Shea shear a sheep near Bantry Bay on the Berea Peninsula in County Cork. 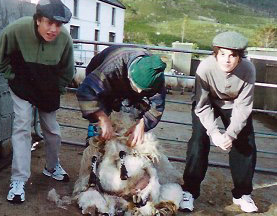 What truly astounds me about Ireland, though, is how an island the size of South Carolina could produce so many literary masters– Swift, Goldsmith, Yeats, Shaw, Wilde, Joyce, Beckett, and Heaney, to name the ones who come immediately to mind.

Despite his kooky mysticism and rightist politics, Yeats is my hero, and despite his arrogance and sometime meanness, Joyce is my hero.

Joyce, of course, had his issues with his native land. For example, Dubliners isn’t exactly what you would call a flattering portrait of that city. I’m currently on Disc 30 of the Donal Donnnelly/Miriam Healy-Louie recording of Ulysses, “Episode 16,” the so-called Eumaeus episode when Bloom and Stephen seek refuge in a cabman’s shelter after Stephen has been punched out by an English soldier.

An old tar, DB Murphy comes into the shelter and asks Stephen if he knows Simon Dedalus, Stephen’s father, and Stephen says, “I’ve heard of him.” The seaman answers, “He’s Irish [. . .] All Irish.” Stephen “rejoins” (to use Joyce’s dialogue prompt) “All too Irish.” As a Southerner, I can certainly identify with Stephen’s love/hate relationship with his native land.

Anyway, listening to Donnelly read Joyce’s rich broth of Anglo-Saxon and French-derived words, I have gotten the cadences stuck in my head, and to purge them, I’ve composed this negative ditty, trying to stick with only Anglo-Saxon, through which I mean not to stereotype my Irish brethren but merely to make music out of misery.

Slop flung from a window above

Splatters on stone in globby plops.

After toil a stop at the pub,

Fritter away their coppery coins

Greedy sucklings at their breasts,

Keening toddlers at their feet,

Their stillborns gone, but not forgotten,

Their overripe love on the road to rotten.

Out in the street across the way

Waifs and strays banding about.

Yelping and mewling till the sun comes up.

A few years back, I contemplated moving to western or southern Ireland for retirement, maybe to the Beara Peninsula down in County Cork or up to County Mayo on the coast, perhaps purchasing a rustic cottage with a glimpse of distant mountains or of the sea.

Have you ever witnessed a rainbow in Ireland? I don’t know if it’s the air up there or the angle of the sun, but the rainbow Judy Birdsong and I saw in ’79 mesmerized us. It was so misty-shimmering wonderful that it could almost make you believe in leprechauns, in magic, in Lir.

Beara’s and Mayo’s landscape is gorgeous, their people gregarious. The Irish and my kinsmen, folk from the South Carolina Lowcountry, share a love for the oral tradition of story-telling. We’d get along fine I think. The Irish love music and poetry and literature. For example, before the Euro, James Joyce himself appeared on Ireland’s ten-pound note, which would be like having Walt Whitman on a US fifty. We Americans might put our beloved authors on stamps, but they don’t rank high enough in our estimation to appear on legal tender. Of course, Irish currency doesn’t have “In God We Trust” printed on it, which would not go all that well thematically with Mr. Joyce’s bespectacled mug nor with Herman Melville’s otherwise presidential countenance.

But I digress. When I mentioned this silly romantic notion to Judy, she reminded me that my three trips to the Emerald Isle occurred in May or June, not December or February, and she reckoned that in those dark and dreary months the odor of burning peat might very well lose its allure as building a fire transitioned from exoticism to drudgery.

Miss Birdsong knows all too well that dreary weather and Wesley don’t get along. In fact, a shrink back in the day suggested that I could very well suffer from Seasonal Affective Disorder (which I have immortalized in a poem you can listen to me read in my golden Lowcountry baritone HERE). No, day after day of leaden skies, the sun setting by three or four, would be bad for my state of mind.

Take this winter, for example. We might as well be in Ireland — or Ingmar Bergman’s Sweden. A glance at the five-day forecast, more often than not, has yielded a succession of cartoon clouds, dark, with resiquite raindrops slanting down. 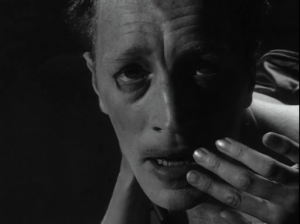 My neighborhood “pub,” Chico Feo, roofless as it is, has been closed for days at a time, often for rain, less often for cold, but closed nonetheless. As I have driven to work morning after morning through fog, I have half expected to see Max Von Sydow and/or Liv Ullman trudging along the side of Folly Road.

But as PB Shelley famously put it, “If winter comes, can spring be far behind?” Sure enough, the sun peeped out on consecutive days this week, so I popped in at Chico Feo. On the first day, I got to witness a book burning and on the second some low wattage police brutality.

Perhaps I underestimate Folly as a retirement locale. 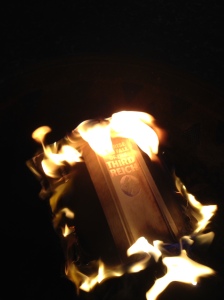 But, before I go, let me assure you that the book burning wasn’t Fahrenheit 451.1.0 but part of a very indie film noir murder mystery starring the Chico crew, my hobo hero Greg, and prolific Chris, a graphic artist and novelist who works at Bert’s.

And the “police brutality” merely consisted of a very, very, very drunk man having his arms twisted behind his back and then being slammed rather roughly to the pavement of Second Street. Alas, I had absentmindedly left my phone at work, so I didn’t get to capture the disturbance, which was quite a spectacle taking place as it did in front of the mural of Bert done up like a smiling, squinting, dismembered pirate. 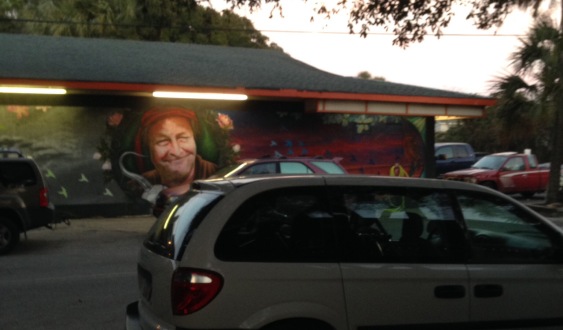