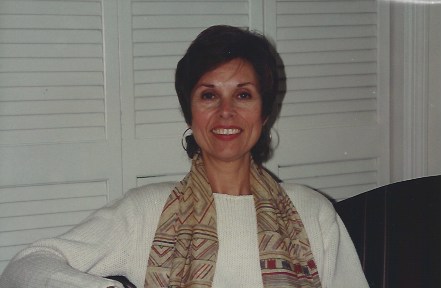 I first met Erica in August of 1985 at a school leadership conference; she immediately impressed me with her eloquence and presence. Although “from off,” Erica came to Charleston as a pilgrim, embracing the city’s Otherness rather than criticizing its eccentricity. I dare say that few scholars anywhere know as much about Charleston writers such as Beatrice Ravenel, Josephine Pinckney, and DuBose Heyward as Erica did. A few years ago, we collaborated on creating a course for adults on the literary movement known as “The Charleston Renaissance,” and although our efforts came to naught, I learned so much about Charleston’s literary legacy from working with her on the project. She was forever a teacher.

Although it’s sometimes easier for a teacher to pretend that she just doesn’t see, whenever Erica encountered bullying, student backbiting, or the twisting of truth for personal advantage, she directly confronted the offender, expressing her displeasure rationally, calmly (and with serious eye contact). On the other hand, Erica championed talented students who had acquired the reputation of being troublemakers. As I put it in the speech I delivered upon her retirement, “Erica possesses that admirable talent of being able to discern whatever diamonds may be lurking somewhere beneath the layers of mud adolescents sometimes coat themselves with. She inspired these rebels to consider the world at large as she cultivated their creativity, channeling their anger and angst into art.”  How life affirming to have a wise woman as an advocate, someone who understands your youthful dissatisfaction with a wounded world. It can be life-changing.

Drama was Erica’s favorite genre, and over the years she orchestrated a number of superb student-directed productions, plays in which actors performed without microphones, having to project their voices throughout the acoustically challenged spaces of Gwenette Auditorium.  She carefully chose each play according to the abilities of the senior class who performed them, on one occasion writing a script herself. More often, however, she selected plays of high literary merit, exposing students and adults to the joys of commedia de arte or the absurdities of Pirandello. I remember Jeannie Faircloth Green, the superb math teacher, leaning over to me during an intermission and remarking that “after five minutes, you forget it’s a student production.” 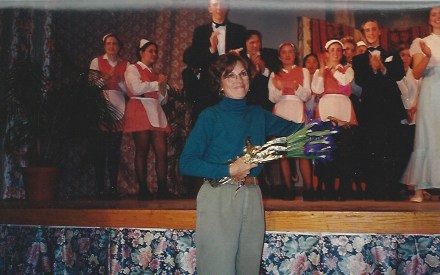 Ultimately, however, teachers earn their pay in the classroom. As our mentor Sue Chanson has said, an excellent English teacher can teach at any level. Throughout her career, Erica taught sixth graders, and seniors, and grades in between, introducing them to Pip and Estella via Dickens, touring the Lake District with Wordsworth and Coleridge, guiding well-to-do eighteen-year-olds through the impoverished, labyrinthian streets of Dostoyevsky’s St. Petersburg. She taught impressionable souls how language functions, how it can sing  — or screech — and how to manipulate words to convey melody or cacophony according to the writer’s purpose. Being able to string sweet sounds together to embody devotion is a valuable skill, but being able to rat-a-tat Anglo-Saxon plosives that spit like machine gun fire can also come in handy. Porter-Gaud’s reputation as a school that produces superb writers owes an enormous debt to Erica Lesesne, who had a hand in creating the English Department’s curriculum. And, oh, the hours she spent carefully assessing writing, circling misplaced modifiers, bracketing fragments, praising deft phraseology and clear thinking. Each student, handled with care. Taken seriously.

Erica Lesesne lived a good life and has left a legacy that will live on, not only in the memory of her devoted family —  Dan, Emma, and Daniel, their spouses, and their children —  but also in the memories of a generation of students who were so very lucky to have her as a teacher. For the sake of our own children, let’s hope the cliché  “they don’t make ‘em like that anymore” isn’t true. 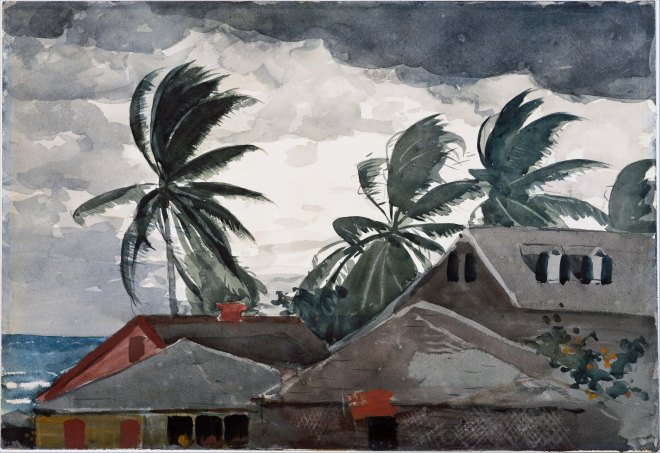 Between foreseeing and averting change
Lies all the mastery of elements
Which clocks and weatherglasses cannot alter.
Time in the hand is not control of time,
Nor shattered fragments of an instrument
A proof against the wind; the wind will rise,
We can only close the shutters.

As I type this, my wife Judy Birdsong and I are awaiting Hurricane Matthew’s arrival on a barrier island off the coast of South Carolina. Ominously enough, Folly Beach is the name of this island. Folly’s main historical claim to fame is that Union soldiers occupied the island during our Civil War[1] and Gershwin wrote the music for Porgy and Bess here while staying at DuBose Heyward’s beach house. Heyward’s novel Porgy, by the way, features a hurricane, but one that sneaked upon the characters in those simpler days before Jim Cantore became a household name.  Nothing against Jim and the well-meaning folks at the Weather Channel, but enduring the high keen of their histrionic prophecies is a bit of a drag for us seasoned veterans of what Adrienne Rich calls later in the poem quoted above “troubled regions.”  Also, no doubt, well-meaning, Governor Nikki Haley of South Carolina shut down the state from the capital to the coast Tuesday evening.  She actually decreed all capital city schools be closed, including the University, even though the capital, Columbia, is situated 100 miles inland, and the order came over 48 hours ago.[2]

Our decision to defy Governor Haley’s mandatory evacuation order worries some of our friends, and it ‘s not surprising given the Weather Channel correspondents’ brow-beating and pleading. Perhaps because I am a native here, and this will be my sixth storm, I’ve come to resent the complete and utter lack of nuance we are subjected to during tropical events.

For example, we’ve been warned that there will be “storm surges that we’ve not seen since Hurricane Hugo,” which is true, though with Matthew the surges at Charleston are estimated to be 4 – 6 feet and with Hugo the largest was measured at 21 feet. 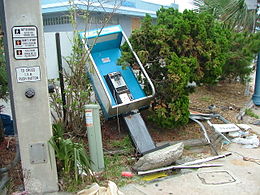 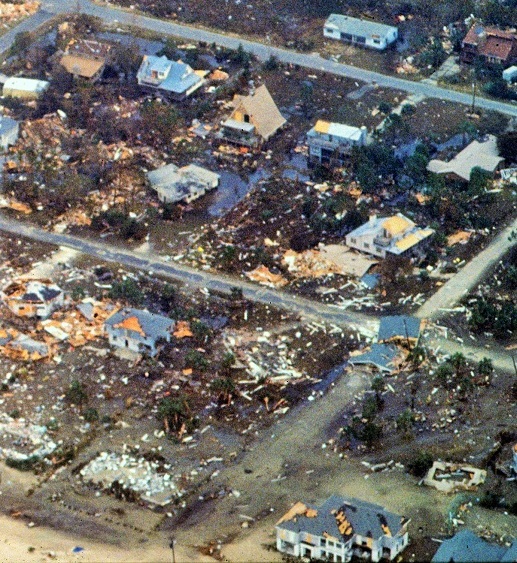 Believe me, if I lived in a mobile home or a one-story house on a slab at sea level, I would be long gone. However, we don’t, are in our 60’s, and as Judy puts it, “I  have cancer anyway.” In other words, we’re having fun, an adventure.   If only Fernando and Alameda Marcos could join us and sit in these throne-like stacked chairs hauled in from the screen porch. 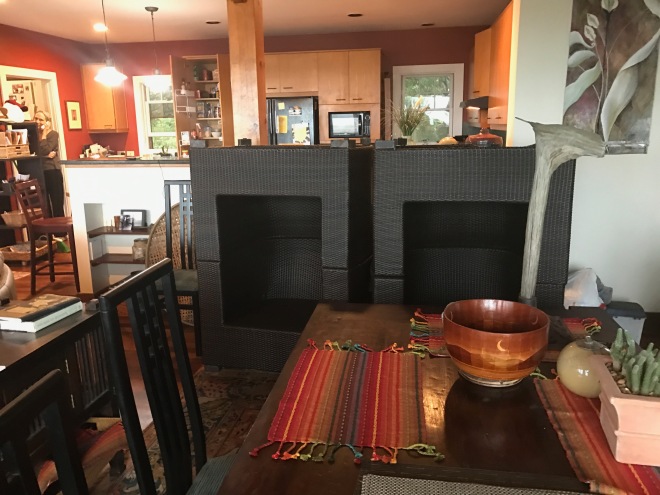 We believe in science. Matthew’s pressure has risen 9 millibars in 6 hours, our house was built to exceed hurricane codes, and its bottom floor is 30+ feet above sea level.

In fact, my biggest concern is that we’re going to run out of boiled peanuts. 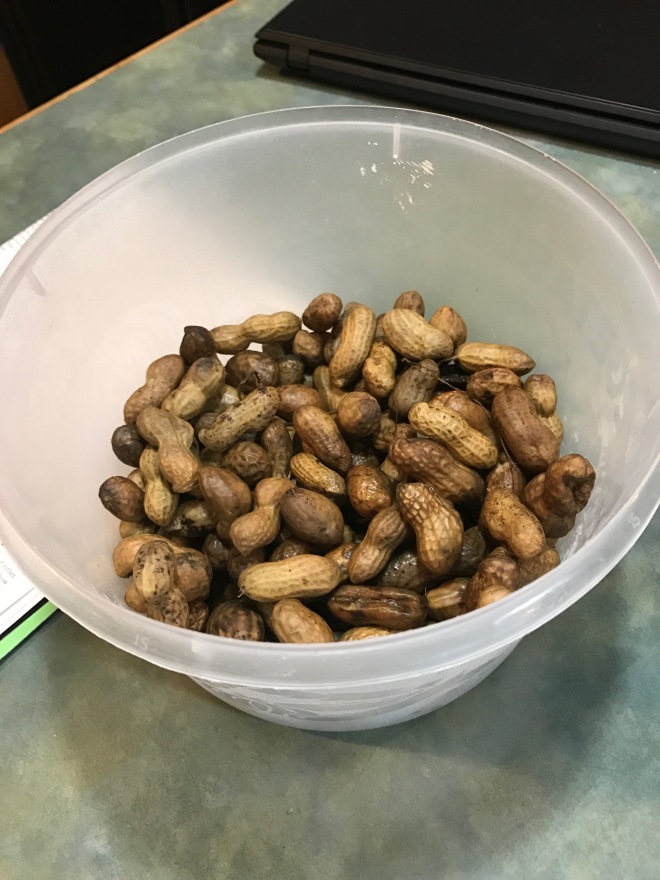 [1] AKA among the unreconstructed as “the War Between the States” or, worse, “the War of Northern Aggression.” As Hamlet put it, “though I am native here/And to the manner born,” I somehow ended up a liberal and acknowledge my region’s “manifold sins and wickedness” yet still somehow love Dixie, treasure my native soil. Go figure.

[2] Governor Haley, once the darling of Sarah Pallin, perhaps, to use hurricane lingo, has jogged to the left during her two terms, though it would appear that she’s not all that big on science. My son, who teaches in Orlando, much closer to the storm’s “wrath,” had a full day of school on Wednesday and a half day yesterday.