Do expect a prompt beginning right around 8 PM when the lights go down, the audience reacts, the musicians take the stage, and the lights come up again dimly. Dylan doesn’t like the have his photograph taken — it’s forbidden — and the relatively darkened stage makes capturing a decent image virtually impossible. On the two occasions when the stage is well lit, if you attempt a surreptitious snap, beware of flashlight wielding ushers who will spot-light you in the act and bark at you like a hall monitor. 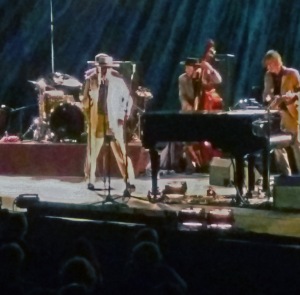 Don’t expect the audience to arrive on time, to be able to sit still and listen, or to remain silent during the performance. Throughout last night’s show at the North Charleston Performing Arts Center, audience conversation constantly hummed beneath the music like static. Of course, you could blame Dylan for not keeping their attention, but I suspect these folk would behave the same way during the Sermon on the Mount, especially if they had been swilling down beer and overworking their kidneys.

Do expect a superb, tight band: guitarists Stu Kimball and Charlie Setxon, bassist Tony Garnier, drummer George Receli, and multi-instrumentalist Donnie Herron playing mostly steel guitar but also banjo and fiddle. As my companion James T Crow aptly observed, these musicians performed more like an orchestra than a band, like an ensemble working together inventively and unselfishly for the sake of each individual song.

Expect Dylan to look cool in a white suit and hat, to strike poses, to shuffle in minimalistic dance moves, to play the harmonica, and to shuffle back and forth between a piano on the side of the stage to center stage where he sings behind a mike stand. Don’t expect much from either his harp-blowing or piano playing, but expect every time he hits a note on the harp for the audience to erupt in delight as if Sonnyboy (Rice Miller) Williamson had just risen from the dead.

Also, if you’re a true Dylan fan, expect to be pleasantly surprised by his voice, which sounded much healthier than when I last saw him in May of 2013, and seemed to improve as the night went on. If you’re not a true Dylan fan, expect to be disappointed by its gravelly timbre and lack of range. As another concert companion, Keith Sanders, puts it, “You can always tell when somebody doesn’t know much about Dylan because they start off talking about his voice.”

Don’t expect a jukebox full of greatest hits. And don’t expect the three “standards” he plays — “She Belongs to Me,” “Tangled Up in Blue,” and “Blowing in the Wind,” to sound like the records — in other words, expect non-standard standards. However, expect to be blown away by the reconfiguration of “Blowing in the Wind.”

Expect the concert to end around ten, for Dylan not to introduce the band, or to even bow. I don’t know if you can expect what we heard last night — a rare audible “thank you” and “we’re gonna take a short break.”

I see I’m at the end of my typed page, so as Dylan put it at the end of his MusiCares speech: “I’m getting out of here. I’m gonna put an egg in my shoe and beat it.”