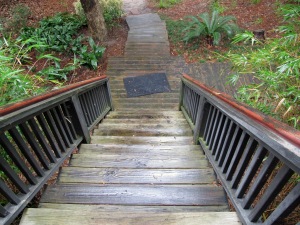 No way I’m descending these treacherous stairs leading from my house when the temperature is hovering a mere 5 degrees above freezing!

One of the peculiar aspects of living in the South that Northern transplants have to acclimate themselves to is our inability to cope with the slightest manifestation of winter precipitation — including rain. Here, in Charleston County, the schools are closed today, even though my outdoor thermometer reads 3 degrees (38F). True, it is raining, the highways are slick, but folks in Boston might just perceive the driving conditions as optimal.

Don’t get me wrong.  I’m okay hanging out at home. I can sit with a steaming cup of Jameson-laced coffee hot cocoa and grade my essays without interruption, or better yet, I can waste time by recalling the not-so-halcyon days of my youth and how we entertained ourselves on miserable rainy days like today.

Although I liked to read as a pre-and-early teen, I spent most days outside playing unsupervised with the neighborhood kids. We built forts or played whatever sport was in season — football in the fall, basketball or field hockey in the winter, and softball on summer evenings when the temperatures became bearable.

If the weather precluded playing sports outside, I often sought out an indoor sport substitute.

For example, on a rainy February day like today, I might break out my electric football game. For the uninitiated, these games consisted of a metal gridiron that vibrated and tiny plastic men – linemen, wide receivers, and quarterbacks with arms cocked – whose plastic foot flanges responded to the vibrations by putting the men in motion. Unfortunately, more often than not, the men moved in circular paths, making the spectacle seem less like a football game but more like a Greek tragedy where the plague-smitten citizens of Thebes nonsensically stumble blindly, bumping into one another, wheeling in senseless circles of crazed despair.

The football itself was a molded-spongy manmade cotton-like oval. You’d line the men up, your opponent would line his up, and then you’d hit the switch and set the Thebans to their inchoate ramblings. Not surprisingly, I could rarely find anyone willing to play with me, so I played myself, having one team be Clemson and the other be Michigan State or some other detested Northern powerhouse.

That electric football set ended up being destroyed by a brother in a well-deserved act of revenge I’d just as well forget about.

But then there was always auto racing.

One Christmas, seduced by commercials, I asked for a slot car set, which I received, and it would have been the ideal toy for a miserable rainy day; however, for whatever reason, we could never get the goddamn thing to work properly. The metal brushes beneath the cars never made contact, and if they did, one car was so much faster than the other, it was sort of like Usian Bolt racing Orson Wells. The attached video shows two cars actually flying through the air and landing successfully on the track, a feat I suspect took thousands of takes.

By far, my favorite rainy day sports substitute was a hockey game that required no electricity. You and your opponent operated sliding men with rods you pulled out and twirled to manipulate a puck. It was fun, if not very much like hockey.

All in all, I’m not sorry in retrospect these toys were mostly lousy, nor do I lament not having the realistic games like John Madden Football or Forza Motorsport 3 because that’s all I would have done for hours. No doubt my vocabulary and imagination would have suffered.

No, back then I had to turn to books to occupy my time indoors, and the Hardy Boys certainly allowed me the vicarious thrills of road racing:

Frank and Joe Hardy clutched the grips of their motorcycles and stared in horror at the oncoming car. It was careening from side to side on the narrow road . . .

[. . .]To their amazement, the reckless driver suddenly pulled his car hard to the right and turned into a side road on two wheels[. . . ]

[. . . ]The boys scrambled back onto their motorcycles and gunned them a bit to get past the intersecting road in a hurry [. . .]

On their right an embankment of tumbled rocks and boulders sloped steeply to the water below. From the opposite of the road rose a jagged cliff. The little traveled road was winding and just wide enough to pass.

“Boy, I ‘d hate to fall off the edge of this road,” Frank remarked. “It’s hundred-foot drop.”

“No shit, Sherlock,” Joe said smiling. “We’d sure be smashed to bits before we ever got to the bottom.”

Who needs kinesthetic stimulation when you’re hanging with Frank and Joe. 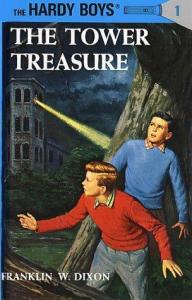