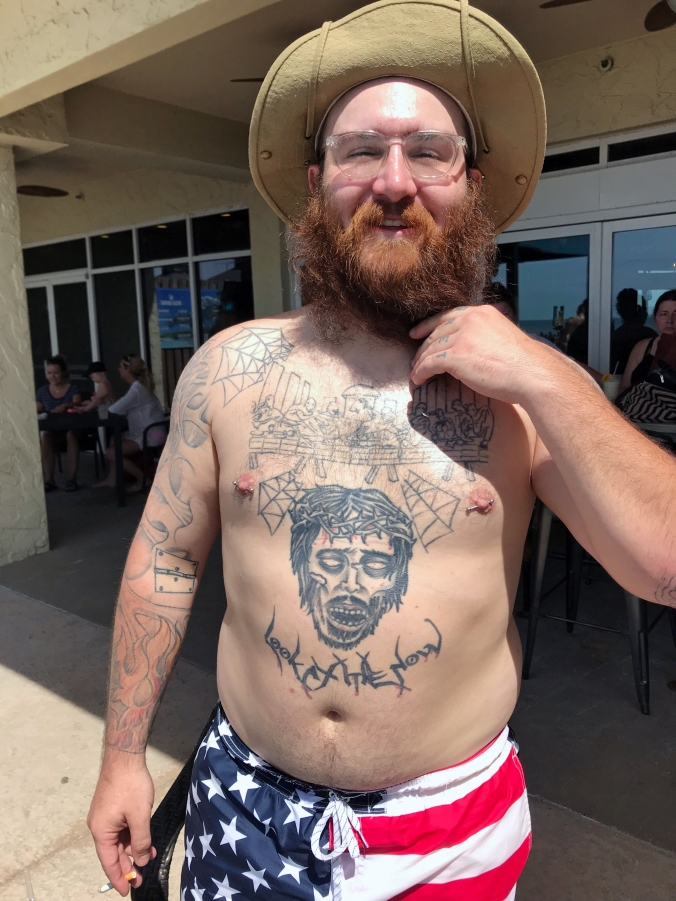 Last Sunday, after returning a rented golf cart, Caroline and I walked over to Planet Follywood for breakfast and then over to the Tides for a rum-infused tropical treat (her) and a hoppy yeast-born malt-based brew (I-and-I).  As we sat in a slice of shade in the corner of the plaza of the outdoor bar, a shirtless, bearded fellow walked past.  He had a picture of a spine tattooed over his own spine, flanked by a pair of wings tattooed on his shoulder blades.  “Wow, dig that,” I whispered.

We continued our conversation as the man and two of his companions – also shirtless and heavily tattooed – took a seat at a table about ten meters away, the wings-spined fellow facing us.

“What’s that tattooed on his chest?”  Caroline asked.  “Jesus?”

We talked about trying to take a surreptitious snapshot but decided against it.  It was then that the title came to me: “Ode on a Tattooed Torso.”

When we passed them in leaving, Caroline asked him whose face was tattooed on his stomach.

As we entered the cool of the bar proper, Caroline asked me if I had heard what he had said.

That stopped me in my tracks.  “I got to get a picture.”

“Do you think he’ll be annoyed?”

“Okay, I’ll wait here.  It will be less awkward without me there.”

So I retraced my steps and introduced myself, handed him my Hoodoo website card, explained that I wrote a blog and would love to take a picture and write about his tattoos.  “Of course,” he said, standing up beaming.  “That’s not the response I was expecting to get,” he said.  “I was afraid you might be offended.”

I wished I had asked him if many people were offended, but I didn’t, nor how he came to acquire such an animus for Jesus.  Fanatical parents?  Anger at the horrors of the world?  He seemed the opposite of angry, just another hedonist spending the Sabbath in self-indulgence.

So we went home and studied the photograph, which prompted several ideas.  First, this tattoo was testament to our First Amendment rights, which allow us to say or display ideas that are anathema to the majority.  As George Orwell put it in “Freedom of the Press,” [a]t any given moment there is an orthodoxy, a body of ideas which it is assumed that all right-thinking people will accept without question. It is not exactly forbidden to say this, that or the other, but it is ‘not done’ to say it, just as in mid-Victorian times it was ‘not done’ to mention trousers in the presence of a lady. Anyone who challenges the prevailing orthodoxy finds himself silenced with surprising effectiveness. A genuinely unfashionable opinion is almost never given a fair hearing.”

Second, it occurred to me how tolerant we US citizens are for the most part.  If our tattooed man lived in Saudi Arabia and went out in the public square sporting a tattoo of Zombie Muhammad, he’d be a corpse faster than you could say, “All praise be unto him.”

I decided to write the poem “Ode on a Tattooed Torso” modeled on Keats’s “Ode on a Grecian Urn,” employing the so-called ten-line Keatsian Ode Stanza.  Although I intended the poem to be comic, a sort of parody, it became something a bit different: praise for a brave lost soul who uses his body as a canvas to display his obviously heartfelt but unpopular beliefs.

If you decide to read it, I highly recommend hitting the audio and to read it along with my voice.

Ode on a Tattooed Torso

With apologies to John Keats

In the juvescence of the year

Thou rotund torso beneath that russet beard,

Uncovered from a brothel.  Zombie Jesus

Come not to save but to devour us,

The antithesis of the sacred cow.

Its human canvas confronting us

With an objective correlative. Wow!

But those unheard are often ignored.

Attention to itself above the Zombie Lord.

We barely notice them, if at all.

And who would have the courage to stare,

To lean in, to take it all in, though enthralled?

I wonder what images adorn your balls.

Judas hanging from a tree?  The walls

You walking act of art, when old age bleeds

Away that ink, may this verse your protest protect,

Freeze in time, though an inchoate protest.

4 thoughts on “Ode on a Tattooed Torso”