You may have forgotten, but ten years ago this week, the Obama White House was embroiled in one its most serious scandals: the President of the United States worked in the Oval Office without a coat and tie.

The Oval Office symbolizes…the Constitution, the hopes and dreams, and I’m going to say democracy. And when you have a dress code in the Supreme Court and a dress code on the floor of the Senate, floor of the House, I think it’s appropriate to have an expectation that there will be a dress code that respects the office of the President.

I think our sitting president is acting so unpresidential …. He is dividing us as a nation. He is not bringing us together. He’s willfully dividing us. He’s petulant [. . .]

Ronald Reagan would never go into the Oval Office without his jacket on — that’s how much he revered the presidency. This guy (Obama) worked like hell to be president, okay? He’s got it. Behave like a president. 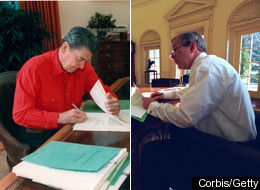 Thank God, we now have a president who possesses a sense of propriety, one who isn’t “divisive” or “petulant.”

Sure, the Trump Presidency hasn’t been without controversy:

Investigations by the U.S. Attorney for the Southern District of New York:

Investigations by the U.S. Attorney for the District of Columbia:

Investigations by the U.S. Attorney for the Eastern District of Virginia:

I dare you find me a photograph of President Trump in the Oval Office without a coat and tie and label pin.  I dare you!

One thought on “Presidential Fashion Policing”