It’s the beginning of the spring semester of 1973, and my best friend, my roommate Warren, has quit school, has split to go on tour with a band called Wormwood. My other suitemate George, who prefers to be called Bo-Syph, is a full-blown alcoholic who disapproves of pot smoking. After he first moved in, he ruined my Rolling Stones poster by peppering it with darts, which, of course, also marred the walls beneath.

All day and night George/Bo-Syph sits in his matchbox of a room drinking 16-oz. cans of Busch Bavarian beer while watching a black-and-white TV the size of a cafeteria tray. The floor of his room doubles as a closet and a depository for empty beer cans, fast food wrappers, and yellowed newspapers. His main source of exercise is walking to Burger King and emptying ashtrays in his room once they have sufficiently overflowed.

One night before Warren split, George developed the DTs, and Warren and I had to escort him, wounded-soldier style, to the infirmary. George doesn’t go to class, doesn’t purchase textbooks. In fact, he only has had one social encounter that I know of. A girl from his hometown came to visit him, and they fucked robustly for two straight days, rarely leaving the room. She could have been cast as the lead in The Mama Cass Story, though she wore elastic pants, not tied-dyed mumuus, and had an upstate South Carolina accent so caustic I was afraid it would rust the radiators.

When I arrive at my room after Christmas break, the first thing I notice is that someone has affixed a cross on the wall over Warren’s bed. There’s also an altar on a shelf with two white candles. It turns out that my new roommate is named Charlie, a graduate student working on a Masters degree in music. Short and plump, with thinning blonde hair and a pinkish completion, he could be Truman Capote’s first cousin.

Like Warren, he plays keyboards, but unlike Warren, he wears pajamas to bed. Each night before retiring, in his pale blue pajamas, he lights his altar candles and gets on his knees to pray. Five minutes later, after audible amens, he rises, snuffs out the candles, crawls into bed, and starts snoring like a bronchitis-ridden wildebeest. 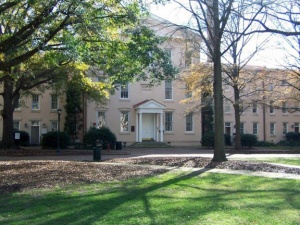 The setting of the story; the downstairs window on the far left is our suite

Given my nocturnal habits, I rarely witness Charlie’s prayer ritual, but on the brick walkway leading to our dorm, I can sometimes hear his snoring as I return from bar hopping or studying in the library. When I open the door to the suite, both inner bedroom doors are closed. My bedroom is dark; blue light flickers from beneath George’s.

The snoring begins with a harsh, hellish, rasping intake, and then there is a slight pause that offers the false hope of cessation – only to be shattered by an exhalation that roars like a phlegm-powered flame-thrower.

By Valentine’s Day, I’m at the end of my rope, so desperate that despite my fear of bureaucracy, I make an appointment with University Housing. Well washed and wearing a collared shirt, I tell a nice youngish woman that I’m desperate, that I’m living the Southern Gothic with two antithetical freaks right out of Flannery O’Connor, one a 30-year-old closeted religious fanatic with no apparent friends, the other the 20-year-old a racist alcoholic gun-fetishist, the equivalent of a stereotypical Mississippi sheriff in a ‘60’s movies.

I beg. I plead. “You got to get me out of there,” I say. “Look,” I say, “if you don’t move me out of there, I’m going to hang myself, not only that, but I’ll tape a sign to my shirt that says, ‘I have hung myself because the Housing Department wouldn’t move me.”’

The attractive young woman smiles and assures me that I will be hearing from them, but I never do.

Ultimately, though, living with George and Charlie made me revaluate my place in humanities’ continuum. Maybe I wasn’t as fucked up as I had thought. Compared to Charlie and George, I was practically Wally Cleaver. Maybe there was hope for me after all.