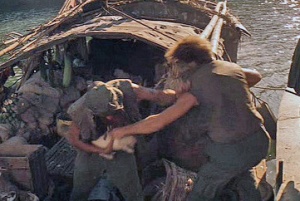 I don’t remember ever seeing the name Caitlyn spelled with a “y” before this week, but now, this morning it appears in two incarnations on the front page of my local paper, Charleston, SC’s Post and Courier. One “Caitlyn” belongs to the decathlon 1976 Olympic gold medal winner formerly known as Bruce, the other to a 15-month-old Chocolate Staffie mix whose muzzle had been wrapped shut with electric tape right here in Charleston.

Caitlyn, sometimes spelled as Caitlin, is an Irish female given name. It’s a lovely trochee with its long A and liquid L, and I suspect you’d lose a bit of its lilting cadence if you were to Anglicize it to Katelynn, though that would be a killer name for an Americana singer from Natchez.

Caitlyn the dog has become an international phenomenon, and for sure, it ‘s heartbreaking to think of the suffering she must have endured (I can’t bring myself to post a picture of her), and it’s encouraging that the sadist who tortured her has been arrested. I’m reminded of my own recently deceased German longhaired pointer/ border collie/ Cerberus mix, Saisy, who had been starved and tied to a post with a two-foot rope before noble souls rescued her. She ended up fairly okay, though, except for food issues, which never really went away, but over the years, she quit flinching when you leaned over to pet her head or rub her muzzle and quit snapping at you if you petted her for too long.

I miss her every day. 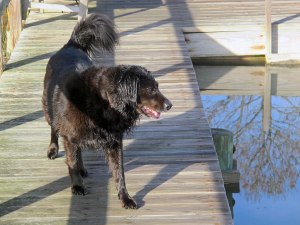 For some reason, many of us tend to care more about pets, especially dogs, than other people. I noted this evolutionary oddity over the years through showing the film Apocalypse Now to high school students as a follow up to their reading Heart of Darkness, the novella the film is loosely based on.

Set in Viet Nam, the film earns its R-rating via violence. In one particularly harrowing scene, known as the Sampan massacre, American soldiers machine gun to death an entire family of Vietnamese transporting produce on a boat – men, women, and children – when the soldiers panic after a Vietnamese girl runs to protect a puppy.  As the family is ripped apart by bullets, my students sit there silently; however, when one of the soldiers – Chef – finds the surviving puppy and picks it up roughly by its scruff, the room fills with highly audible disapproving oooohs.

Meanwhile, stories like the one below we hardly hear about, and most of us don’t care about:

[Kansas Governor] Brownback has often characterized his opposition to expanding Medicaid and other poverty programs, in Wright’s words, as a “moral rejection of dependency.” Last June, for example, Brownback told the Heritage Foundation’s Daily Signal Web site that Kansas had not expanded Medicaid because “We’re trying to push people that are able-bodied right now to get a job.” Similarly, Brownback pledged in his State of the State address this year to continue “helping people move from dependence on the government to independence.”

But, in practice, Brownback’s resistance to Medicaid expansion is causing some people to move from independence to desperation. [Nation editor Kai] Wright spoke with several Kansans who are suffering because of Kansas’s severe eligibility requirements. Far from the right-wing caricature of lazy moochers, they are hard workers who aren’t looking for a handout. One woman, RaDonna, is too sick to hold down food, let alone a full-time job. Yet, as a childless adult, she doesn’t qualify for Medicaid — and the state rejected her application for disability benefits. While RaDonna now lives with her sister, Cathy, she insists on helping with the laundry and dishes to earn her keep. “She can’t do the whole sink full of dishes without stopping and sitting down for a while,” Cathy says.

No, we’re more interested in Bruce Jenner’s transformation into Caitlyn and argue about whether he’s courageous or merely an attention-starved ex-Kardashian in-law.  After all, the poor will always be with us.

In the courage department, though, I give the nod to RaDonna.

One thought on “A Week of Caitlyns”