The most terrifying book I’ve ever read is the clunkily titled Final Truth: The Autobiography of Mass Murderer/Serial Killer Donald “Pee Wee” Gaskins as Told to Wilton Earle.

Unless you’re a sadist, please don’t go out and buy this book. Gaskins takes perverse pleasure in graphically describing torturing, dismembering, murdering, and disposing of the bodies of acquaintances (“serious murders”) and hitchhikers (“coastal killings”). It’s awful stuff, stomach-turning. I would have quit reading it myself except that I’m almost positive I was picked up hitchhiking by Pee Wee Gaskins in the summer of 1971. 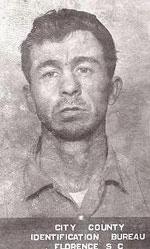 As the title promises, you get the story from Pee Wee’s mouth, and certainly some linguist somewhere is parsing Pee Wee’s diction and syntax for some study on the speech patterns of South Carolina crackers. In addition to butchering his victims, Pee Wee also slaughters English, yet he has a way with words and takes pleasure in creating colorful, vulgar metaphors and similes.

It’s as if Huck Finn’s pappy’s telling you the story of his life.

on his second wife: [. . .] every time I was around that girl my balls and pecker felt like a nest full of hornets was buzzing around and stinging and trying to shoot out.

on sex with a contortionist: she loved to fuck while twisted up into all kinds of other pretzel shapes.

on his first successful escape: I knew my chances of escaping was skinny as a coon-dick toothpick

You get the picture.

Perhaps the book’s only redeeming quality is that it might offer psychologists some insight into what drives a human being to murder time and again, person after person. Certainly despite Pee Wee’s semi-positive summation of his childhood — “My childhood weren’t all that bad all the time. I certainly weren’t in no way what you could ever call abused” — other descriptions belie that assessment:

Next thing I knew, they [Pee Wee and Marsh’s stepfathers] was dragging Marsh and me to the barn. They stripped Marsh first — roped his ankles together and threw rope over a joist and strung him-up upside down, then his mama commenced to paddling him with a pine slat. Soon his ass was bleeding, and then she told his step daddy to whup him with his belt [. . .] Then it was my turn to be strung up naked. I felt the pine board splitting my butt; then my step-daddy stropped me with his belt like I hadn’t never been stropped before.

And here’s Pee Wee’s explanation to the periodic mental condition that drove him to murder :

But no matter how things went, good or bad, I always felt something bothersome was astirring inside me. It was like I had this ball of plumber’s lead rolling around in my guts. Most time it lay quiet, just weighting me down. Other times, it growed bigger and hotter, like it was going to explode. Every once in a while I dreamed (I still do) that it blowed me apart and there was all these millions of little pieces and parts of me running around and flying around trying to find each other and put me back together.

I don’t remember how we — my brother David and I — ended up in the middle of the back seat on that beat-up old Buick. Did one of the boys get out and let us in? Did we crawl over the boy? We were seventeen and fourteen, and the boy maybe seven, but he had a cigarette in his mouth and a beer in his hand.

“Where y’all going?” The driver asked.

“We’ll take you there then.”

He was a very short man chauffeuring a carload of Cub Scout-aged juvenile delinquents. There were four of them, all younger than David and I, all smoking, all drinking cans of Old Milwaukee.

For forty something minutes en route from Summerville, we had been stuck hitching on the side of St Andrews Boulevard across the street from a typewriter repair shop . It was David’s first time hitchhiking. Sure, the car looked sketchy, but we were desperate.

Once we were settled in the back seat, the seven-year-old next to me got out the empty casing of a Bic pen, loaded it with a spitball, and shot the driver in the back of the neck. He whirled around and stubbed the glowing orange tip of his cigarette into the boy’s arm, which immediately brought forth a yowl, tears, and a cacophony of spiteful laughter from the rest of the crew.

It was weird enough to witness a seven-year-old with a beer and cigarette in hand crying, but as I slouched down in my seat, I noticed that the driver had three spitballs lodged in the creases of the back of his neck.

The boys asked the driver to tell them about the [racial epithet] he had killed last week, but he wasn’t forthcoming. Then they asked him how many men he had killed in total. I assumed they were merely trying to frighten us. Throughout the twenty-minute trip, the boys liberally jettisoned trash, including empty beer cans from the moving car. I was hoping — how I was hoping — that a police car might pull us over but no such luck.  Needless to say, their language was filthy.

But true to his word, the driver took us all the way to Folly. In those days, before the Holiday Inn obstructed the view, you could see the ocean itself as you crossed the bridges, and what a welcome sight it was. I told the driver to please let us out in front of the police station, that my daddy was chief of police, and he did, and then two of the boys tossed empty beer cans at us, and the car pulled away in a cloud of smoke.

Happily, we ran into some friends from Summerville at the Washout so didn’t have to hitch home; however, I can’t say that I learned my lesson and continued to hitch until I purchased my first car at age 25, thanks to Ralph Birdsong, my soon-to-be father in law. [You can read about a subsequent and in many ways scarier hitchhike encounter here].

So, I more or less thought about the incident as time spent in a Flannery O’Connor story until Judy purchased for me as a whim Pee Wee’s autobiography from the dollar bin at a Mount Pleasant book store and I read that Pee Wee used to take his nephews and their friends down to the beach occasionally but would “never do no murders on them trips” because you couldn’t trust kids not to blab.

I can’t say for absolutely sure it was Pee Wee, but I do know this: there was evil in that car. You could sense it; it was palpable.