You know you’re dealing with an ancient human settlement (9thcentury BCE according to our guide book) when the city center is named La Ciudad.[1]  We’re now in Ronda, a ridiculously picturesque cluster of buildings perched on a cliff overlooking a precipitous gorge.

Getting to the hotel through the narrow twisting streets (think Theseus/labyrinth) produced in me something like claustrophobia.  My rear view side mirrors came within centimeters of those of the cars parked along the curb, and pedestrians strolled as obliviously as if they’d just mainlined some anti-Darwinian drug (okay, smack) that rendered them oblivious to the (albeit creeping) oncoming traffic. I recalled the unsmiling face of rent-a-car woman at Seville’s airport suggesting we purchase extra insurance.[2]

However, ever so propitiously, as Caroline shouted, “There’s the hotel,” and suggested I park illegally for a sec while she ran in the inquire, a space came open right dab across the street.  Parking had been an issue in Jerez. Concha had directed us where we could park for free on a tree-lined street, which was great, and worked (no towing, smashed in windows or Yankee Go Home graffito), but our rental did look as if it had been a vehicle parked in the town of Alfred Hitchcock’s The Birds.[3]

The hotel itself — Enfrente Arte — is dada-esque.

I’ll let the photos do the talking. 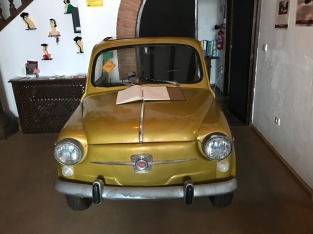 Here’s what’s hanging in my bathroom. 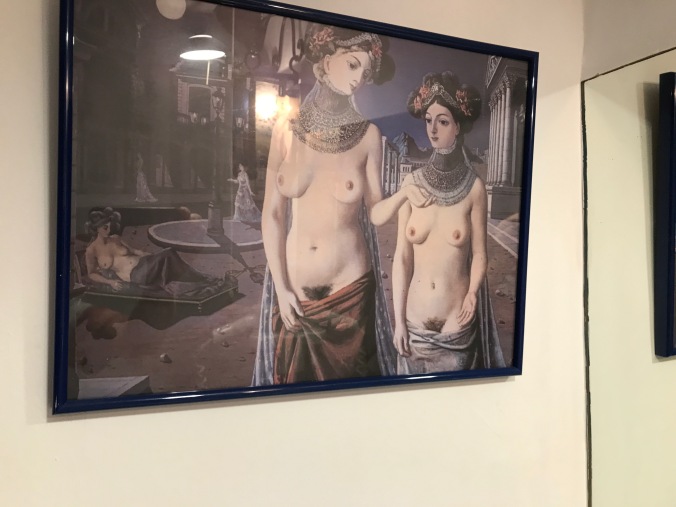 The most exotic amenity is a sitting area where fish provide pedicures (or, to be truthful, nibble your feet).

OH YEAH! BEER AND WINE ARE INCLUDED AND YOU SERVE YOURSELF!

The Romantics and Hemingway dug Ronda, and it’s no wonder because it is wonderful. 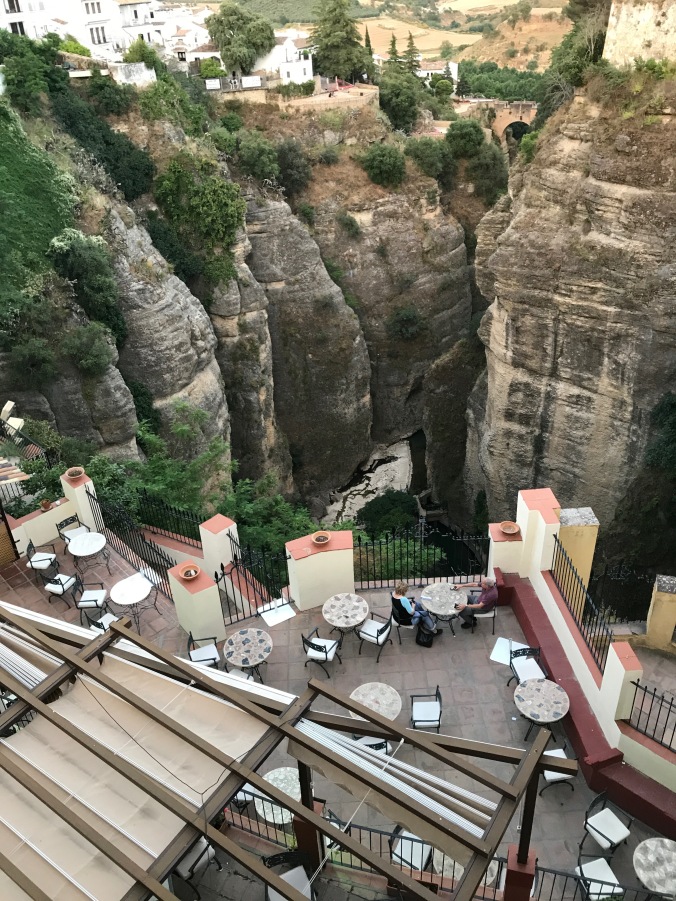 [1]One of my favorite scams to pull on Brit Lit students is to pose the question “What was the name of the first theater in Elizabethan England?”  They always answer, “The Globe,” but the correct answer is “The Theater.”

[2]I’ve driven a lot abroad (including Jamaica, Ireland, Scotland, and England) and the only damage that happened (in Portugal) American Express took care of.

One thought on “Hotel Magic”