Essentially, British pop music falls between two poles of influence, the music hall tunes of the 19th and early 20th Centuries and the R&B co-opted by the Brit bands of the ’60’s (with the Beatles more or less representing the former and the Stones the latter).

Certainly, songs like “Honey Pie” from the Beatle’s White Album owe more to Harry Dacre’s “Daisy Bell” than they do to any Chuck Berry tune. 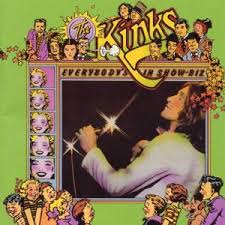 One British band who in its later years owed much to the music hall tradition is the Kinks. Although they began as perhaps the very first hard rockers in history with singles like “You Really Got Me” and “All Day and All of the Night,” by ’72 front man Ray Davies had abandoned three chord anthems and looked back to the golden ages of music hall and Hollywood for his inspiration.

The double album Everybody’s in Show Biz marks this transition.  The first record consists of studio recordings that confront life on the road or hearken back to the nostalgia of Mickey Rooney and George Sanders, and the second features songs from a two-night Carnegie Hall concert.  Most of the tunes from the concert come from the Kinks’s previous album Muswell Hillbillies, which deals with the frustrations of 20th Century life and presages Davies’ forthcoming nostalgic bent..  The tune “Skin and Bone” that I’ve illustrated through the short film below offers an example of this transition from boogie woogie to Vaudeville: